Monument to the Discoveries

Experience the past of Portugal by visiting the Monument to the Discoveries, an incredible tribute to the protagonists of the greatest marine explorations

A giant ship made of white stone stands out against the sky of Lisbon: the Monument to the Discoveries (in Portuguese Padrão dos Descobrimentos), is a monumental sculpture that celebrates those years that have written the history of Portugal.

One of the most recent monuments of Lisbon, the Padrão dos Descobrimentos was initially made as a temporary piece of art to attend the Portuguese World Exhibition of 1940, and then it was rebuilt in 1960 to celebrate the fifth centennial of the death of Infante Henry the Navigator, also called the Navigator, who played a key role in the oversees expeditions of Portugal.

The monument was built along the shores of the Tagus river, the starting point of the great maritime ventures that brought great richnesses to Portugal from the 15th until the 16th century. The monument represents one of the main attractions of the charming district of Belém, which is entirely dedicated to the discoveries of Portugal.

Visit to the Monument to the Discoveries

With its majestic size, the Monument to the Discoveries dominates the whole district of Belém. The view will leave you breathless due to the huge size of the monument as well as to the great contrast between the white marble of the structure and the blue of the sky.

It is possible to access the monument passing through an elegant front yard decorated with hundreds of colorful marble tiles that create a huge rose of the winds.

With your entrance ticket to the Monument to the Discoveries you can go up to the top of the monument and enjoy a great panoramic view of the river, from Oeiras to Alcântara, and admire how the Tagus river flows into the ocean. It won’t take too long before you can spot some of the most famous Belém’s attractions, like the Belém Tower and the Jeronimos Monastery.

Downstairs you can visit the Belém Cultural Center, which opened its doors in 1985; it is an exhibition space with permanent and temporary exhibitions to learn more about the monument and the historical period to which it is dedicated.

The huge stone ship is decorated on both sides with a series of sculptures representing the great protagonists of the maritime ventures of Portugal; navigators, cartographers, colonising, missioners, warriors, writers, kings and queens.

Of course, among all these characters there are also the four navigators who undertook the most famous and important Portuguese ventures: Bartolomeo Diaz, who first managed to reach Cape of Good Hope; Vasco de Gama, who after a two years epic journey managed to find the route to the Indies; Pedro Álvares Cabral, who discovered Brazil; Ferdinando Magellano who was the first European man to navigate in the Pacific Ocean.

The biggest statue is the one of the Infante Dom Enrique, which is located at the prow of the ship; other decorations feature some other symbols, like a sword, a flag, and the astrolabe.

The rose of the winds

From the top of the Monument to the Discoveries it is possible to admire the view of the Wind Rose, that is to say a square decorated with a unique mosaic made of pink, white, and black tiles. It was made by architect Luís Cristino da Silva and it was inaugurated on August 1960.

The Rose of the Winds is a tribute to the glorious times of marine explorations; the square decorations portrait the rose of the winds featuring a huge planisphere inside, five small roses of the wind, three other elements representing the wind, a mermaid and a mythological fish holding a trident. The dates and the ship names refer to the most important steps of the Portuguese expansion between 1400 and 1500.

Have fun “exploring” the world as you keep walking up and down the square, maybe following the ancient routes of the greatest Portuguese seamen.

The numbers of the Monument to the Discoveries

How to reach the Monument to the Discoveries

From the center of Lisbon you can reach the monument to the Discoveries by taking tram n. 15 and several other buses. 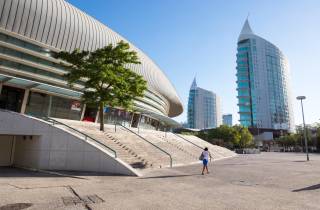 Lisbon Card: 24, 48, or 72-Hour Pass
Save money and time with a flexible Lisbon Card. Enjoy free admission to top attractions and discounts at various landmarks. Available for 24, 48, or 72 hours, the card provides unlimited free access to the public transport system.
From 21,00 €